Ophthalmology cases that give you heart palpitations 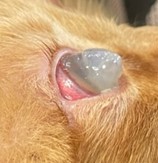 Acute bullous keratopathy is an uncommon rapidly progressive corneal disease, which is usually seen in young adult cats. The condition is manifested with edema (bulla), which can range from a few millimeters in diameter to the complete cornea. Several small vesicles may coalesce to form a larger bulla. This condition is usually bilateral, but initially, it may appear unilateral. The diagnosis is made on the basis of clinical presentation and ophthalmologic examination, although the condition must be differentiated from septic ulcers with collagenolysis. Light microscopic examination confirms the diagnosis by revealing marked edema separating the collagen fibrils of the corneal stroma. Inflammatory cells are inconsistently present; when present, they are usually scant and occasional polymorphonuclear cells will be noted within the stroma. No abnormalities are seen in Descemet’s membrane or the endothelium on light microscopy. The cornea surrounding the lesions appears normal. The etiology and pathogenesis of feline bullous keratopathy is unknown. In published reports, tests for feline immunodeficiency virus, feline leukemia virus, feline infectious peritonitis virus, feline herpesvirus, aerobic bacteria, Mycoplasma spp., Chlamydia spp., and fungi were negative Microbial cultures were negative and organisms were not detected on cytologic examination.

There are several theories as to how this condition develops in cats.

The 1st is that it may be an inherited stromal dystrophy, as has been reported in the Manx cat. Ultrastructural examination indicates severe stromal edema, as well as abnormalities in Descemet’s membrane. However, abnormalities are not detected in the endothelium. In contrast to cats with bullous keratopathy, the entire cornea eventually becomes involved and the corneal lesions are usually progressive over a period of several years.

A 3rd theory is that an underlying condition, such as pre-existing uveitis, may cause bullae formation, as the inflammatory process taking place in the anterior chamber may disrupt the ability of the corneal endothelium to draw fluid from the corneal stroma.

The best treatment for this is a third eyelid flap, topical sodium chloride 5% ointment or solution QID, topical antibiotic (don’t use NeoPoy Bac) QID, pain management. Recheck after 2 weeks and release the third eyelid suture. Typically, the cornea has returned back to normal. This condition can be unilateral or bilateral and it may or may not recur. 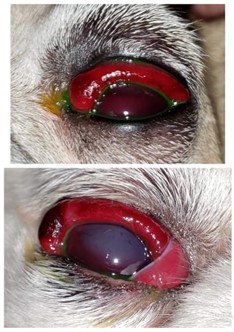 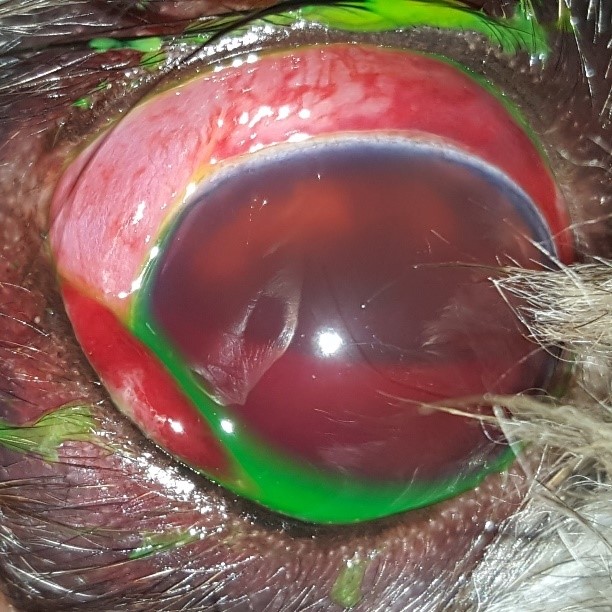 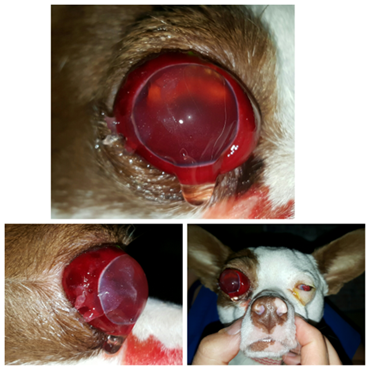 The sclera, along with the cornea is part of the fibrous tunic of the eye. The fibrous tunic holds the shape of a globe. The sclera in dogs and cats is thinnest near the optic nerve at the posterior pole (in humans and horses, the sclera is thinnest near the limbus). Blunt force trauma, such as from a dog bite (most common), causes excessive pressure to the globe and because of the weakness at the posterior pole, the sclera ruptures into the orbital cavity. The fibrous tunic is covered in conjunctiva. The eyelid, conjunctiva, and cornea are continuous with each other. When the sclera ruptures, retinal detachment occurs, and the uveal tract (iris, ciliary body, choroid) is torn and damaged. The uveal tract is highly vascularized along with the retina, expulsion of retina and portions of the uveal tract through the ruptured sclera causes bleeding. This blood is trapped within the orbital cavity and under the conjunctiva. Eventually, it migrates forward causing subconjunctival hemorrhage, hyphema, and billowing of the conjunctiva under the eyelid as demonstrated in the pictures above.

Scleral ruptures in dogs and cats carry a grave prognosis for vision and comfort. 100% of them are blind and eventually, phthisis bulbi occurs if the globe is left within the orbital cavity. The long-term best treatment option in these cases is enucleation. Alternatively, medical management can be tried. Medical management typically consists of artificial tears, topical pred acetate and/or topical NSAID, oral pain management, and time. A discussion about removal in the future needs to be addressed. When the globe becomes phthisical, another set of problems occur including, dry eye, glaucoma, poor eyelid conformation such as entropion, and just general discomfort 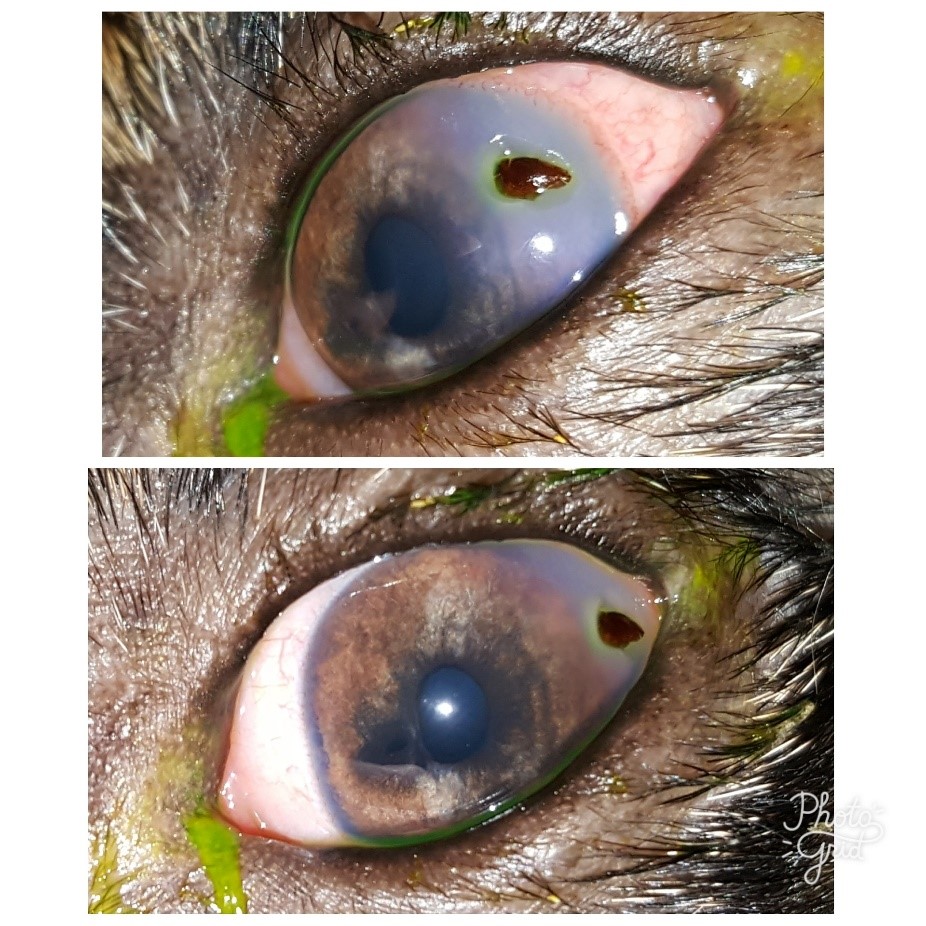 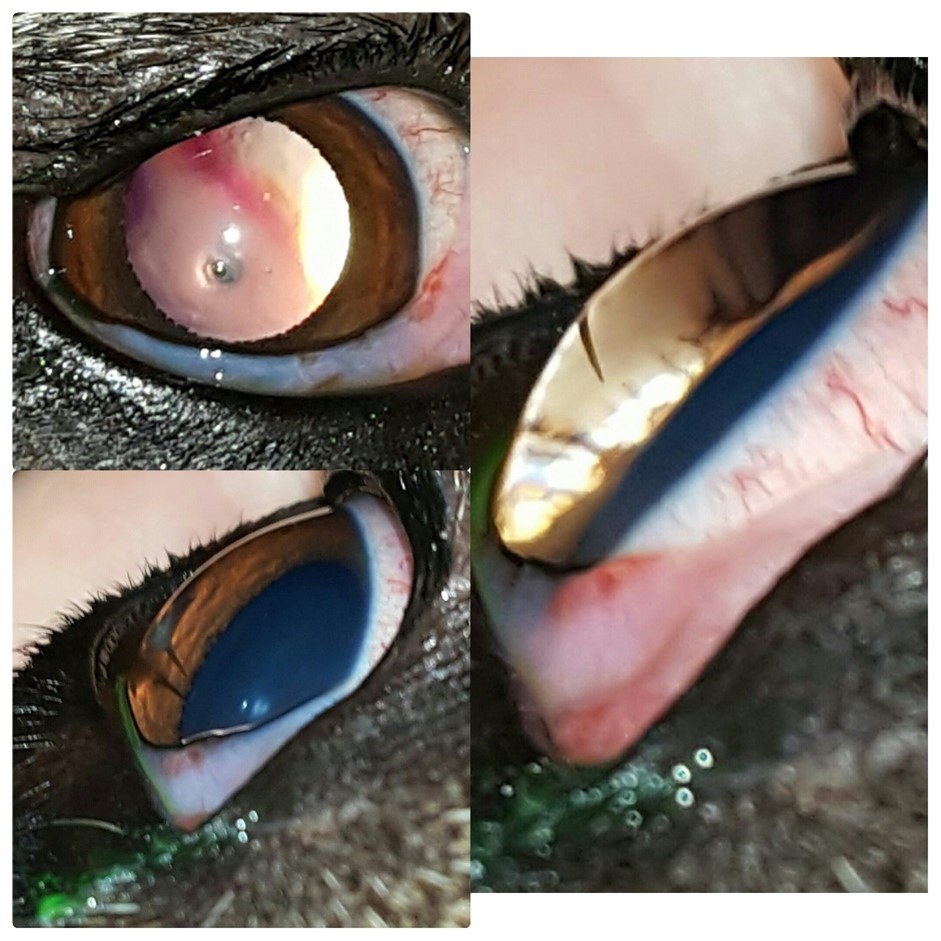 The cornea, is a minor portion of the fibrous tunic. The cornea is clear, important in refraction, and protected by the tear film, the third eyelid, and movement of the superior and inferior eyelids. Unfortunately, some dogs are quick and excited when plowing through fields of sharp objects looking for their hunt or rolling around in the leaves in the yard and fail to blink appropriately. Normally the eyelids and tear film would help protect and move the foreign body from the eye and would be washed out by the tear film eventually, however some foreign bodies remain “stuck” to the cornea. Clinically this may or may not be manifested by blepharospasm. Some dogs remain comfortable and a foreign body is only noticed when the blood vessel response starts or an “opacity” is noted on the cornea. Most corneal foreign bodies are superficial (remain on the corneal surface), however, there are the occasional few that are full thickness and penetrate the lens, the iris, both or just get stuck and are viewed penetrating into the anterior chamber without damage to the rest of the eye. Damage to the lens and uveal tract can be detrimental if not caught quickly as these can result in phacoclastic uveitis requiring cataract surgery in order to save the eye for vision or hyphema. In some cases, albeit rare some animals require enucleation because of the latter.

If you need help with patient eye issues or have more questions, I'm HERE!