May 31, 2022
Based on an article that first appeared at
GeniusVets

A common myth about dogs is that barking, growling, lunging, biting, and baring their teeth means the dog has an aggressive demeanor. Presenting any combination of these behaviors often leads to a dog permanently labeled as aggressive and needing supervision around other pets and children. Even worse, this increases the dog’s chance of being euthanized at shelters. The reality is that there are seven types of dog aggression, and each has its root causes and methods for behavior correction.

Dogs are naturally territorial and protective creatures, but their behavior when feeling threatened should never rise to the level of aggression. The signs and triggers can vary from dog to dog, but they all connect to one of seven different types of aggression. It’s also essential to distinguish between aggression and behaviors that look like aggression, as detailed by the American Kennel Club.

Types of dog aggression include:

Fear aggression often presents as an offensive posture with the dog attempting to create distance between themselves and the offending trigger, which could be a person they’re uncomfortable with, another dog, another pet, or a wild animal encountered in the yard. This type of aggression can also be towards an inanimate object, such as a loud vacuum cleaner, a reflection in the glass, or a noisy appliance. Alleviate fear aggression by slowly socializing your dog, which will help them understand that other dogs, pets, and humans don’t always mean harm. If the fear is related to an inanimate object, continue use, and over time your dog will understand there is no threat. The AVMA details how treating chronic anxiety can help alleviate fear-based aggression.

Territorial aggression is typically the result of an unfamiliar human in the dog’s home or yard. Territorial aggression can be intense, as the dog fears for themselves and their owners—who they are often fiercely protective of under any circumstance (some breeds are more territorial than others). To lessen your dog’s territorial reaction, reward calm behavior when visitors come to your home and enroll them in obedience training. Obedience training will help them react to your command when telling them to stay calm.

Idiopathic aggression is the most unpredictable type of aggression, with the trigger either unknown or misunderstood by the dog’s owner. “Idiopathic” translates to “arising spontaneously with no known cause,” making this form of aggression the most dangerous since it can’t be foreshadowed based on the dog’s environment. Idiopathic aggression can be severe, with a possible neurological reason behind the behavior, and warrants talking with your veterinarian. 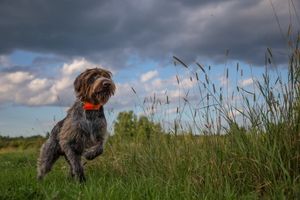 Predatory aggression is usually limited to hunting dogs or dogs with the tendency to chase prey. If directed towards humans, it’s considered the result of a medical or mental condition for your veterinarian to address. Predatory aggression is the rarest of all forms of dog aggression. The only effective way to stop predatory aggression is avoidance of the environment causing the behavior. If your dog is chasing animals in the yard, take them on walks instead. Only hike with your dog on a leash if they chase prey while hiking. Of course, it’s no reason to think of your pet as a “bad dog,” as much of this is instinctual, particularly in certain breeds.

Control-related aggression is often the result of improper handling and is usually directed at owners or other humans who have consistent interaction with the dog. Dogs will exhibit this type of aggression once they’ve decided they don’t like their exchanges with a particular person and will present with this aggression to keep them away. Control-related aggression is most common among first-time, inexperienced dog owners and is highly preventable with proper education and training for the dog owner.

Resource guarding aggression, otherwise known as possession aggression, presents when a dog becomes territorial over possessions they deem to be exclusively theirs, such as their food, treats, toys, and bed. They fear losing their favorite possessions and will monitor from a distance and rush aggressively if another dog, pet, or human approaches their belongings. This type of aggression is prone to quick escalation. To manage resource guarding aggression, simply pick up your dog's toys, food bowls, and other possessions when your dog is not using them. This will create an “out of sight, out of mind” situation.

Aggression is the most common behavior problem in dogs and the most serious. It often leads to dogs being brought to shelters when the owner feels it’s no longer safe to keep them in the home. Seek the help of behaviorists, trainers, and veterinarians before resorting to a local shelter.