One silver lining during this pandemic is how many people have been adopting dogs. In fact, one Chicago shelter recently declared themselves cleaned out of adoptable dogs for the first time ever. Doesn't that just bring a smile to your face? Some people, however, might agree that this time of home quarantine is an ideal period to adopt but they are hesitant due to certain negative things they've heard about shelter pets. As veterinarians, we've seen firsthand how the love of a shelter pet has changed lives for the better. And we truly believe the old adage that many shelter pets truly know that they were saved and that you were the one who saved them. There is rarely a more special bond, which is why we've taken the time to dispel some common myths about adopting shelter pets below.

Many people believe that, because these animals have been surrendered, they are now damaged in some way. After all, why would someone turn in a perfectly good animal?

Some reasons people surrender shelter pets are as follows:

The truth is that there are many reasons people give up dogs and cats, and very few of them are satisfactory to the shelter staff. However, there is little recourse they can take. Many of these cats and dogs are perfectly adoptable but were taken in by people who didn't realize or never researched just how much time it takes for things like training a dog or teaching a cat to use a letterbox. These things can easily be fixed with a bit of hard work.

Who wants to take on a dog that has shown aggression towards a human? Not many people, that's for sure. But the idea that shelter pets have been surrendered for showing aggression is almost always false. Of course, there may be some cases of dogs that are aggressive in shelters, but it is certainly not the norm. And the tireless workers at these shelters or the foster parents who take in shelter pets will always make the adopter aware of any such issues. 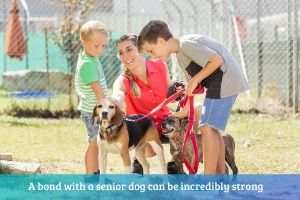 You might like the idea of adopting an older dog or cat for altruistic reasons or even just because the thought of taking on a puppy or kitten right now is too much. However, you might also think that older pets are not able to bond with their owners, which couldn't be further than the truth. The age of a pet has no correlation with their ability to bond. Just ask anyone who has ever adopted a senior dog or cat!

Shelter Pets Myth #4: Going to a Breeder is Safer Due to Bloodlines

Many people want to go to breeders to either get purebred dogs or to avoid getting a dog with aggression issues (see the previous myth!). As the ASPCA notes, "As a result of their breeding, purebred dogs very often have genetic disorders and medical issue predispositions, certainly no less often than shelter dogs. Also, while bloodlines and histories are useful tools to assess an animal’s value, they are limited in terms of predicting behavior." When you think about it, shelter workers are much more motivated to ensure you get a good fit as far as cat or dog behavior, as the last thing they want is for that pet to be returned to them for yet another rehoming.

This couldn't be further than the truth! We've all seen those heartwarming videos of what often goes into a dog or cat's transformation after they've been neglected. What's so amazing is some dog and cat groomers even donate their services to help shelter pets get adopted. On the contrary, some puppy mill conditions are the stuff of nightmares and, if you buy a pet at a pet store, he or she is not only probably dirty but also likely to be sick.

Sure, shelters take some animals with health issues, but their conditions are largely treatable and, even better, they are handled by the animal shelter. All shelter animals are given a veterinary wellness exam and do not get adopted out until they are vaccinated, spayed or neutered, and microchipped. It doesn't get much better than that.

Shelter Pets Myth #7: I Won't Be Able to Get the Breed of Dog I Want

This may be the case, but there are so many wonderful adoptable dogs out there that are ready to win your heart. And don't give up out of the gates either. Call around to your local animal shelters or use a pet-finding website. Chances are, your favorite breed is just a phone call away. And if not, consider a mutt, as mixed breed dogs often have fewer health issues. And trust us, their kisses are just as heartwarming.

If you're thinking of using this time at home during the COVID-19 crisis to adopt a cat or dog but have questions about how to take care of them, don't hesitate to call your local veterinarian.  Not only will they be happy to answer any questions you may have but you may also find your new primary care veterinarian as well.