If you are having a pet emergency, please call CTVSH Round Rock at (512) 892-9038, or visit Pet Specialists of Austin or AVES. Stay safe, everyone!

The Secret to Handling These Five Common CAT-astrophies!

Based on an article that first appeared at
GeniusVets

Cats are beloved pets that offer hours of entertainment with their amusing antics as they leap and climb with grace across every surface of your home. However, some of these cat behaviors are slightly less charming, such as when they leave furniture damaged, curtains on the floor, and other pets stressed by your cat’s actions. Most negative behaviors that cats exhibit are instinctual but can be corrected with appropriate action by the owner. While others are learned behaviors, you can re-train cats to become well-behaved pets that co-exist peacefully in the home with humans and fellow fur family members. Below are the top five behavior issues in cats and how to correct them.

1. Soiling in the House

Eliminating outside the litter box is a common and significant problem for cat owners. While often assumed to be the result of a disgruntled cat seeking revenge, soiling in the house instead of the litterbox is usually due to one of three reasons.

Reasons a cat eliminates outside the litterbox include:

The territorial act of marking is prevalent in multi-cat households and is your cat’s way of sending a message that they are in charge. If there are no other cats in the home, this behavior might warrant a visit to the veterinarian, as a possible urinary tract, thyroid issue, or kidney problem could be to blame. On the most basic level, your cat might be opting for the house instead of their litterbox because it’s not being cleaned enough or located in an inconvenient or undesired location.

Correcting the issue requires identifying which of these reasons is the cause for your cat eliminating outside the litterbox. If they are the only cat in the home, you can stop the marking behavior as the reason and focus on cleaning or relocating the litterbox to see if that resolves the issue. If not, make an appointment with your veterinarian for an exam. The Cornell Feline Health Center offers more insight into the reasons for this behavior and how to correct it. 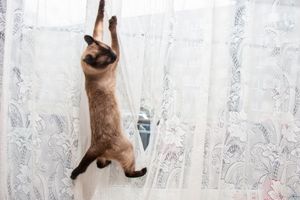 Physically, cats’ bodies are designed to navigate vertical surfaces as much as horizontal surfaces. Unfortunately, some of that climbing instinct is unwanted and unsafe, such as curtain clawing and climbing. When you give cats access to long-hanging curtains, they will almost undoubtedly exclaim “challenge accepted” and scale the curtains to the top, damaging them with their claws. In other instances, cats will climb curtains if they’re anxious and trying to create space between themselves and something or someone making them uncomfortable.

While cats should not be punished for clawing and climbing curtains since it's their instinct, you can help them avoid this behavior. If you have a younger cat, provide them with appropriate climbing structures with a resting spot at the top. Some scratching posts are designed in this way. It also helps to have plenty of interactive toys available to them, which will distract them from the curtains. Engage in playful activities with your cat throughout the day and encourage them to use the scratching post and other cat toys.

Cats have an instinctive need to scratch. It’s their way of expressing emotions, marking objects with their scent, and grooming their claws. They do not understand that it’s a negative behavior, as it serves a genuine purpose for them. Cats tend to gravitate towards furniture to express their natural scratching need because they prefer large, sturdy objects that allow them to dig their nails in and grip somewhat aggressively. 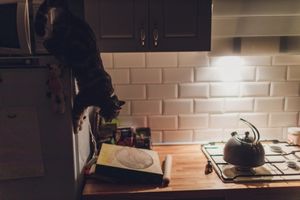 4. Not Sleeping at Night

Some cats are quite busy at night, as they have a different sleep-wake cycle than other pets. Their nighttime habits can mean disrupted sleep for owners, as cats play in the bed, nibble their toes, cry, or yowl. Nocturnal cat behavior is often related to a cat’s natural tendency to hunt prey at night. Still, it could also result from your cat being left home alone during the day and sleeping a lot during those hours. If you get home and don’t make time for mental and physical stimulation for your feline friend, they could very well seek your attention at night. Cat owners can correct this nighttime nuisance with a few lifestyle adjustments.

Nocturnal cat behavior can be corrected by: 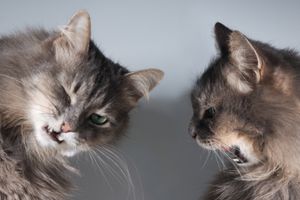 Cats like to maintain a dominant position over other pets in the house, which can often result in them becoming territorial and acting out when they feel their territory is being threatened. In a multi-cat household, cats establish a hierarchy among themselves, with one maintaining a dominant role and the others becoming submissive. Every once in a while, the dominant cat will flex their power by preventing their submissive counterparts from engaging in everyday activities, such as eating, sleeping, accessing the litterbox, and playing with toys. This can cause an extreme amount of stress on the submissive cats.

Spaying and neutering often help curb dominant behavior in cats. However, if that doesn’t lessen or eliminate the issue, separate your cats for several days and slowly reintroduce them. This will force them to relearn boundaries, interact peacefully, and learn to co-exist on a more even playing field. Hill’s Pet Nutrition offers further guidance on dealing with a bullying cat.

Check-in with your primary care veterinarian if you would like to learn more about negative cat behaviors and how to correct them. We're here to help you facilitate your feline-to-human relationship so that you can enjoy one another's company for many years!